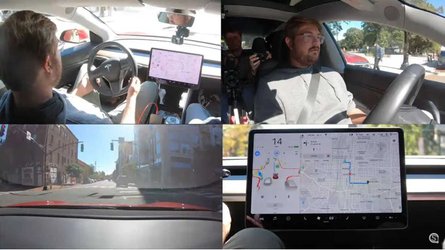 If you didn’t get a chance to check out AI Day, we’ll tell you that a lot of the content was pretty complex, though most Tesla owners likely just tried to focus in on the impact to the brand’s Autopilot and Full Self-Driving Beta technology, which are constantly under fire from by the media.and safety organizations.
Not only has Musk promised „Full“ Self-Driving tech for years, but also admitted that it’s much more difficult than anyone – including himself – could imagine. Nonetheless, Tesla and Musk still tout the technology, its unique pure-vision approach, and its reliance on Artificial Intelligence. While a few other automakers do rely primarily on vision, Tesla seems to be the only brand really pushing the AI angle. In fact, Musk claims that Tesla is the true leader in the field.
During the event, Musk was asked if Tesla may eventually open-source the FSD software. He replied via Autocar:

“Well, it is fundamentally extremely expensive to create the system, so somehow that has to be paid for. Unless people want to work for free.“
“But I should say that, if other car companies want to licence it and use it in their cars, that’d be cool. This is not intended to just be limited to Tesla cars.”