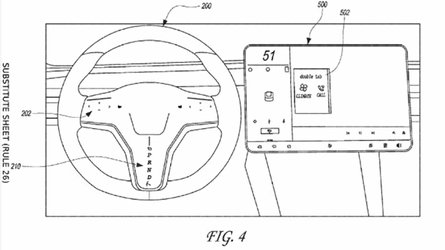 As the patent drawings show, the idea is to have trackpads for your thumbs, which would work not only for browsing through menus, but also recognize gestures. These pressure-sensitive panels would also provide haptic (and audible) feedback in order to reassure the user that a given command was issued.

Such actions as a simple touch, tapping, double tapping and swiping would be supported. And alongside these two thumb trackpads, there would also be an additional touch-sensitive area on the central steering wheel prong – this would be used for putting the car in Park, Neutral, Reverse or Drive, as well as enabling the cruise control (and Autopilot).

The wheel would apparently also have proximity sensors which would sense an approaching digit and highlight various available commands, or maybe bring up some menu bars (something similar can be found in recent VW models with the more advanced infotainment solutions).