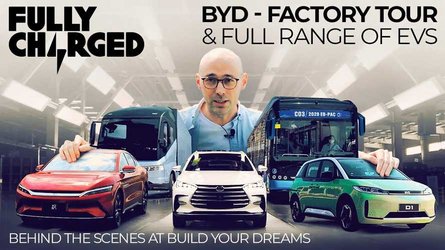 Fully Charged describes this episode as “mind-blowing” and we totally agree. You have to see it to understand how amazing BYD is in terms of technology and overall products.

The Chinese manufacturers are pushing forward very hard and there are already tons of things which they are better at than global competitors.

“What BYD have achieved in the last few years is simply staggering – from batteries and solar panels to a full suite of electric vehicles including cars, trucks, taxis and buses. As well as a tour of the factory, Elliot took the BYD Han and the Tang cars for a drive, checked out the D1 taxi and rode a couple of their electric buses.

With the factory currently producing 400 cars a day, we are pretty excited to see what BYD will do next!”