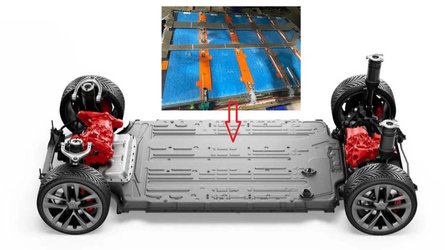 As we can see, there are five large sections/modules inside (instead of up to 16 in the first generation design), which reminds us a bit of the Tesla Model 3/Model Y battery modules/pack.

The refreshed Model S/Model X still utilizes the 1865-type cylindrical battery cells supplied by Panasonic from Japan, unlike the Model 3/Model Y, which have bigger 2170-type cylindrical cells (aside from the upcoming 4680-type that is in the pipeline) or prismatic LFP cells (SR versions, produced in China).

Tesla said in early 2021 that the new battery system and an improved powertrain improved the energy efficiency and allows to increase the number of high-speed quarter-mile runs by 5-times, compared to the prior architecture. We know also that the peak charging power increased to 250 kW.

The battery capacity is probably slightly below 100 kWh (the manufacturer does not communicate the numbers).