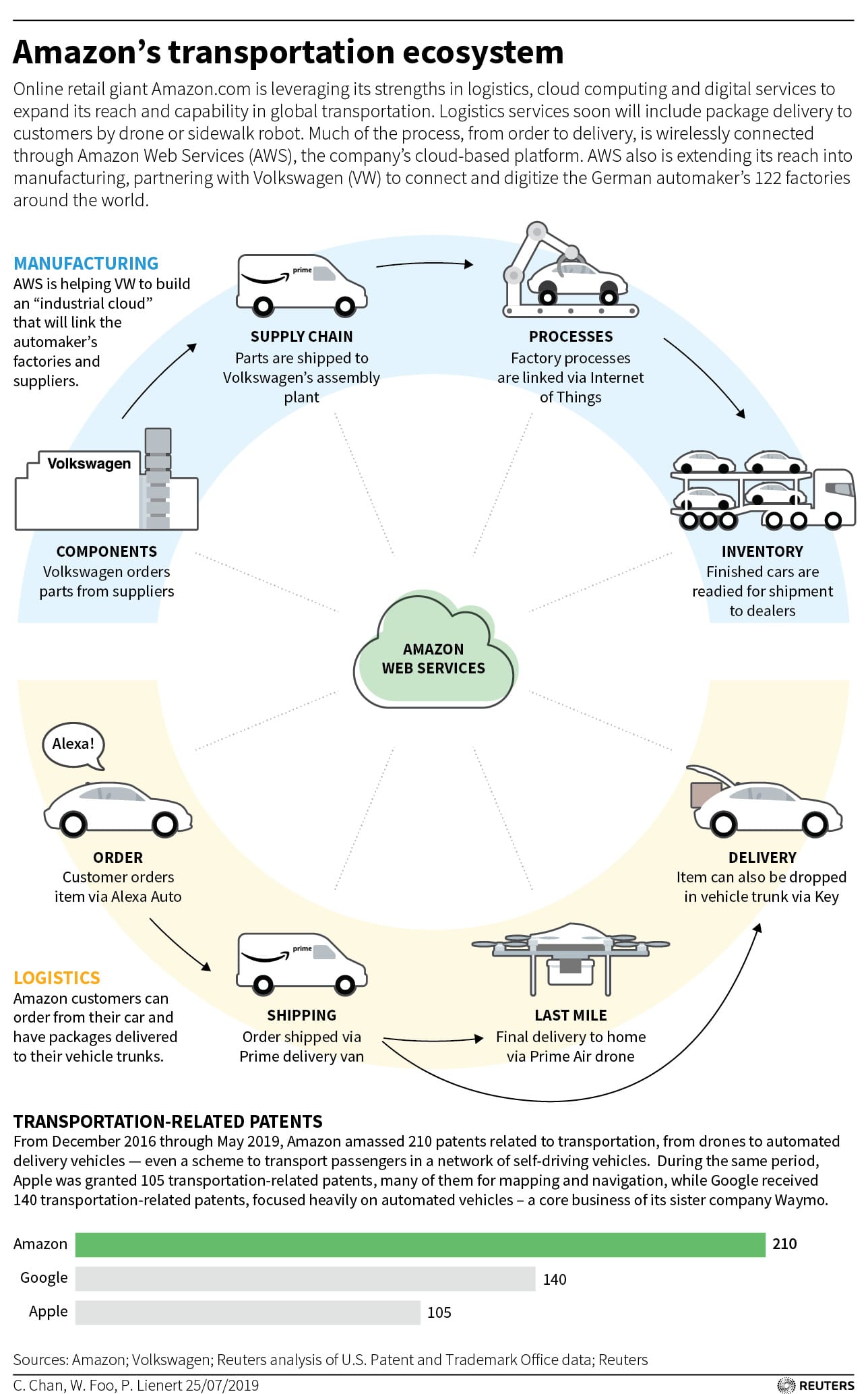 The company, through its $33 billion Amazon Web Services unit, also is rapidly expanding its business with corporate customers, notably through two major cloud-based initiatives this year with Ford and VW.
The. strategic alliance with VW, which includes German supplier Siemens AG, aims to create an "industrial cloud" to digitally connect the automaker's far-flung manufacturing operations — 122 plants worldwide — and up to 30,000 supplier factories, according to Jonathan Allen, head of professional services in AWS' global automotive practice.
Volkswagen in March said AWS cloud-based services, including machine learning and data analytics, would help the automaker to "increase plant efficiency and uptime, improve production flexibility and increase vehicle quality."
AWS has been one of Amazon's fastest-growing, highest-margin businesses and provides a platform for corporate customers — from BMW and Toyota to Avis and Formula One — to manage, analyze and in some cases monetize data.
Gavin Sherry, CEO of Ford's Autonomic web services subsidiary, said the No. 2 U.S. automaker can learn a lot from Amazon, which is working with Autonomic and Ford to build a cloud-based platform for the transportation industry.
"They have the relationships, credibility and know-how that we will need in order to fulfill our vision," he told Reuters.

ALEXA + LOGISTICS
Alexa, Amazon's digital assistant, is taking a leading role in the company's drive to get inside cars.
Amazon is collaborating with a number of automakers to embed Alexa in vehicles, and has made deals with GM, Ford, Volvo and Honda to allow online orders to be delivered to owners' cars.
"Our goal is to bring Alexa to as many vehicles as possible, either through direct integrations with automakers or through automotive accessories with Alexa built in," Curic said.
"We have a lot of work to do," Curic added, including "bringing Alexa to more vehicles and accessories, building new Alexa features for the car and launching our own automotive product, Echo Auto."
Beyond Alexa Auto, much of Amazon's focus has one clear theme: cutting the cost of transporting packages, mainly through the company's Prime and Prime Air delivery and freight services.
It has strengthened those capabilities with the addition of Amazon delivery vans and cargo planes. Its investments in Rivian, which has designed a flexible electric truck architecture, and Aurora, which is developing a software "driver" for autonomous vehicles, point to eventual development of self-driving, electric delivery vehicles, analysts said.
Amazon, which spent more than $8 billion in shipping costs last quarter, is building out the entire logistics infrastructure through the automation of its warehouses, long-haul truck shipments and last-mile deliveries with Scout robots and aerial drones, according to public records.
Electric vehicles are also now a part of Amazon's strategy for connecting homes to its network. Amazon is supplying home charging systems for Audi's e-tron mid-sized electric SUV — a deal that could be a step toward managing vehicle fleets, said Roland Berger partner Stephan Keese.